Nowadays, it seems more and more municipalities and utilities are requiring contractors to hire someone to pressure wash Protecto 401TM -lined ductile iron pipe before they will accept the pipe into their system.

Why is this being done?

Typically, the municipality requires this post-construction to ensure all debris is out of the line as well as catch any depressions or “sags” in the line. The utility will also do this prior to the contractor’s warranty expiring in order to discover any settling of the line, sags, or defects that may appear.

Is there a proper way of doing this?

Yes, there is. An extensive study sponsored by the Ductile Iron Pipe Research Association (DIPRA) and its member-companies was conducted to develop the proper procedure of pressure washing Protecto 401-lined ductile iron pipe without damaging the lining.

If not done properly, damage to the lining could shorten the lifespan of the line, causing the municipality/owner to incur thousands of dollars in repairs and/or a total replacement of the line long before they anticipated.

What damage could this do to the line?

If not done properly, pressure washing could generate what appears to be flaking in the lining and/or a “spider web” effect. At worse, it could instigate delamination of the lining from the pipe wall altogether.

What is the procedure?

Below are the guidelines to follow for pressure washing ductile iron pipe with Protecto 401 and/or cement lining. This procedure was developed with and accepted by the leading epoxy providers to the water and sewer industry:

If this procedure is not followed properly and damage is done to the lining, then who is to blame? Is it the contractor, the manufacturer, or the sub-contractor who cleaned the line? All kinds of questions and delays may arise when putting the line into service.

We strongly recommend that all municipalities/owners who require their sewer lines to be pressure washed incorporate the above procedures into their standard specifications and to enforce these specifications as they do all others.

Where can I find a copy of the proper procedure?

You can simply click on the download button below to recieve a handy PDF Tip Sheet with guidelines OR you can go to the Ductile Iron Pipe Research Association’s website at www.dipra.org to find many technical documents. 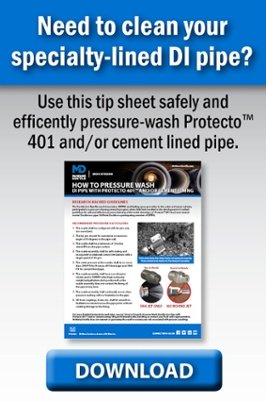 McWane Ductile offers multiple services for our customers extending far beyond manufacturing ductile iron pipe. From design to installation, we take great pride in providing education and assistance to water professionals throughout the water and waste water industry.

Check out all our digital offerings:

Terry Lynch is the General Sales Manager-Southern States. Terry manages the sales force that covers the 10 states geographically located in the southeast United States. His staff consists of two Regional Managers and seven Sales Representatives. Everyday duties include, but are not limited to, pricing jobs, traveling with reps, visiting customers and specifiers, analyzing market changes, and enforcing company policies.

Terry has been with the company for 33 years. Terry’s first job was as a sales trainee in Birmingham, AL.  As an outside sales representative, Terry has covered multiple territories for McWane including TX, FL and TN. In 1996, Terry was promoted to District Manager overseeing the TN, AR and MS territory. In 2013, Terry assumed his current role as General Sales Manager - Southern States.

Terry considers himself extremely fortunate to have found his passion with McWane and he has never looked back. His motto is: “Get out, get seen and get known.” His first boss told him “they don’t give you a vehicle to sit at a desk.” He has kept that in the back of his mind from day one.

Terry is motivated by returning the trust that McWane has put into him by doing his best to promote the success of the company every day.  His contributions to the customer experience lie in the fact the customers know he will not lie to them.  He has always been upfront about everything, both good and bad news. This has helped him gain their trust.

Terry is on the Membership Committee and Program Committee for Water and Sewer Distributors of America (WASDA) as well as a member of the Tennessee Association of Utility Districts and American Water Works Association (AWWA).Terry attended the University of Alabama until the opportunity with McWane became available.

In his spare time, Terry enjoys traveling with his wife, Julie, and their 2 dogs, Cookie and Sandy and spending time with family and golfing.