What Are The Advantages of Ductile Iron Pipe Over PVC Pipe?

Question – What is the difference between Ductile Iron (DI) and Polyvinyl Chloride (PVC)?
Answer – Many things, but some groups may attempt to “muddy the waters” with inaccurate information regarding the two materials.

With the information that follows, we will take a closer look at what really separates Ductile iron pipe (DI pipe) from PVC pipe and why it matters.

Click the red play button in the image below to view a helpful video on the advantages of DI over PVC.

What’s In a Name and What Does Ductile Mean?

Ductile iron pipe is a flexible conduit - Ductile means flexible!  Because DI pipe is flexible, this means it is less likely to shear under stress from normal soil pressure or ground shifts that occur throughout the life cycle of your water system.

Ductile iron is primarily made from recycled iron and steel scrap. DI pipe is recyclable and has no end of life.

PVC is made from chlorine (derived from salt) and carbon (predominantly derived from oil and gas via ethylene). PVC pipe is weak or fragile when compared to the strength of DI pipe. The recycled content of PVC is nearly zero and PVC can only be down-cycled. In addition, PVC is derived from vinyl chloride monomer which is a Group A Human Carcinogen.

It is made rigid by the addition of a stabilizer, and at one time, the PVC industry used lead as a stabilizer. Today, PVC manufacturers use organotins that may pose health risks, but some foreign manufacturers continue to use lead.

A recent water pipe project at a major university involved installing dual 36-inch DI pipelines underneath a critical building on campus. The lines were installed to transport water to a chiller system to cool other buildings.

The piping material selected for this project was Ductile iron because of its ability to withstand ground shift and heavy pressures from the structure that rests above it. PVC, being weak in nature, tends to burst into small pieces due to heavy pressures versus stronger materials such as DI that will not obliterate.

PVC failures also have a history of being catastrophic.  That is, not just a loss of some water or water pressure but a TOTAL LOSS of water. This instability is a severe issue for seismic prone areas. Not only is there a threat of damage from earthquakes, but also vulnerability to destruction from fires that typically follow the earthquakes. If there’s no water, there’s no fire protection.

PVC pipe can also be adversely affected in areas prone to wildfires. For example, the City of Santa Rosa, California estimates the repair of the contaminated Fountain Grove water system could take up to two years. Test results conducted on PVC pipelines indicated they absorbed benzene and other chemicals, resulting in an advisory to residents to not drink or bathe in the water. Replacement costs are estimated at more than $43 million dollars.

DI pipe is impermeable and protects the water supply from toxic infiltration. The C909-16 Molecularly Oriented Polyvinyl Chloride Standard states that polyvinyl chloride may be subject to permeation by low molecular weight organic solvents or petroleum products. Why take a chance with a permeable material?

Would you trust plastic on a bridge? Didn't think so. DI pipe is an excellent choice for high-profile projects such as bridge installations. DI pipe possesses expansion and contraction capabilities required for such constructions. There is no trench support on a bridge to handle PVC pipe versus DI pipe, which does not require trench support. There are many above-ground installations on bridges and piers where DI pipe excels.

Penstocks are installations involving the redirection of streams down a mountain to a power plant. These lines are often subject to extremely high internal pressures due to the elevation changes and head pressure. The physical properties of DI pipe shine again versus the weaker PVC pipe for high-profile installations.

Fire hydrants give us a sense of security, knowing brave firefighters have the equipment available to protect us. Have you ever seen a fire hydrant made of PVC? I didn't think so.

Fire hydrants are made of Ductile iron. The hydrant standpipe is made of Ductile iron as well. There are times when a section of pipe between the DI is installed with PVC with the presumption of “saving money.” However, PVC is typically not connected directly to the hydrant section due to potential thrust forces in that area.

DI pipe is non-combustible and can withstand the stress caused by fires. In an emergency, it can be counted on to provide a safe and reliable supply of water for firefighting.

On the other hand, PVC pipe is combustible. Polyvinyl Chloride, of all the plastic polymers, has been implicated primarily in causing the most severe problem in firefighting today because PVC releases hydrogen chloride gas when as it melts in a fire. Many plastics produce large volumes of pulmonary irritant gases when burned. The firefighter is at fatal risk if he does not know that plastic covered cable is involved in a fire. (U.S. EPA)

I wish I had a nickel for every time a Municipal Operator has mentioned how many PVC leaks must be repaired the same month the hydrants are exercised. Just a coincidence? No, it’s not.

Municipal Operators are trained to slowly open and close valves on the hydrants to reduce the potential for a surge. Firefighters – on the other hand – are clearly focused on THE FIRE. What are the odds that firefighters are going to carefully and gently open or close the valve on a fire hose during the fire? The same surges are present when opening or closing the hydrant valve and are detrimental to products that cannot handle a surge.

The maximum allowable surge pressure for PVC is based on an operating temperature of 73 degrees Fahrenheit. We all know waterlines will not always operate at 73 degrees Fahrenheit. The PVC material is more susceptible to surge as temperature varies. Allowance is also based on a minor velocity change of 1.0 feet/second. PVC also has a "Time to Failure Rate." That's correct, the clock is ticking as soon as PVC is placed into service. See our down-loadable comparison sheet for more details on this.

Ductile iron pipelines are the only material to be included in the International Seismic Design Standards. DI pipe, being a flexible conduit with high tensile strength, provides a product with the ability to flex during seismic activity versus brittle materials that are subject to shear during the same seismic event.

Expansion joints may also be installed to provide expansion and contraction of axial movements. Restraint systems available with DI pipe provide a system that is independently strong and does not rely on ground surfaces for stability.

Another potential installation in areas susceptible to ground shifts is the Horizontal Directional Drilling (HDD) method. This process involves boring a path underground and installing DI pipe below an area that has been reclaimed or is subject to slipping.

For an efficient and easy way to check horizontal drilling calculations, download the McWane Pocket Engineer. We developed this handy app to allow engineers and contractors to do their job by quickly providing critical calculations in the field that would otherwise take valuable time to compute. It's FREE and designed to work on any mobile device.

Water systems achieve maximum flow by using Ductile iron pipe. The strength of DI pipe provides an opportunity for larger Inside Diameters (ID) that result in additional flow. Because it is a weaker material, a 30-inch PVC pipe is needed to match the same ID as a 24-inch DI pipe. Therefore, additional costs must be included for a larger trench and the up-sizing of valves and fittings.

The C Factor is a value used to indicate the smoothness of the interior of a pipe. The PVC industry contends that the C Factor is an issue for DI pipe. However, that is simply not the case with modern, cement-mortar lined DI pipe. Laminar Flow is the real key to flow, not the C factor. Essentially, Laminar Flow is when the fluid flows through the middle of the pipe, reducing the significance of the C Factor as a contributing factor.

The soil must be compacted to 80 to 90 percent of initial soil density for a Type IV or V trench. It is very challenging to compact to 90 percent with optimal conditions. The same size trench must be excavated for an 8-inch pipe regardless of the pipe materials used.

Joint deflection is another area where Ductile iron pipe prevails. DI pipe joints can be deflected by up to 5 degrees. PVC pipe can not be deflected at the joints. Rather, deflection is achieved by bending the pipe. Bending the pipe and adding stress increases the odds of failure or a safety issue later. There have been multiple cases of PVC pipe failing during live tapping.

Over-belling is an installation issue often experienced by many contractors while installing PVC. This practice tends to apply excessive stress on the PVC bell, which typically fails, resulting in leaks. A bell clamp can be installed behind the PVC bell to support the bell and alleviate this issue. Of course, this bell clamp is made of Ductile iron.

Ductile iron pipe reduces installation costs due to the ability to direct tap. Tapping saddles or sleeves are required to tap PVC, which adds more costs. A popular event at water industry conventions is the tapping contest. Operators race against the clock and compete to determine who has the best crew. It is an exciting event, and operators are proud to be victors.

What kind of pipe do you think is used for these tapping contests? That's right: DI pipe. To see this contest in action, hop on over to our ACE’18 Pipe Tapping Contest post where you can watch the AWWA’s 2018 teams compete for the fastest time.

When all considerations are listed, it is impressive to see all the differences and advantages of specifying DI pipe versus PVC pipe. Many facts and examples have been provided here, and there are still numerous others. When calculating strength, durability, longevity, and safety, the obvious choice for the water industry professional designer is Ductile iron pipe.

For even more facts and figure regarding DI pipe versus PVC pipe, check out these PDF downloads: 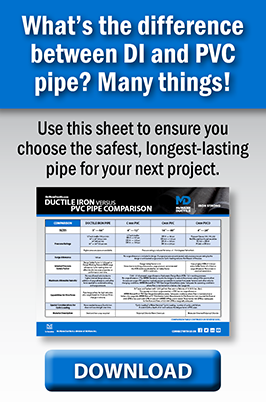 Need Assistance with Your Waterworks Project?

We have team members who’ve managed small and large water utility systems, served in engineering consulting firms, and bring decades of experience in solving field issues involving pipeline construction and operation. From design to submittal, to installation, we strive to provide education and assistance to water professionals throughout the water and wastewater industry.

Jerry Regula, "JR" is a product engineer with McWane Ductile. Jerry’s responsibility is to provide technical support for water professionals at all levels including engineers, private water companies, contractors, municipalities, and water districts. JR has been with McWane Ductile for more than 30 years, starting on the ground floor. Jerry has been involved in nearly all facets of the foundry, providing him with extensive experience in manufacturing, installation, and design of ductile iron water products. JR is a NACE Certified Corrosion Technician, Envision Specialist, and member of the American Society of Civil Engineers. He enjoys spending time with his church where he is a speaker and treasurer, as well as spending time with his wife Susan and their two daughters, Katelyn and Shannon on their farm in Ohio. “Many people do not realize how their water gets to them or how blessed we are to have clean drinking water,” says Regula. “I am honored as a water professional to do my part in ‘Building Iron Strong Utilities for Generations.’" Jerry’s favorite quote: "I can do all things through Christ who strengthens me.” jerry.regula@mcwaneductile.comhttps://www.linkedin.com/in/jerry-regula-6a87b8138/

McWane Ductile is proud to be a part of the McWane family of companies.