How Much Does Ductile Iron Pipe Cost?

It is pretty much a daily occurrence here at McWane Ductile for our sales staff to receive price requests on a variety of ductile iron pipe (DI pipe) products.  Usually this request is for a specific project, but occasionally design engineers will also ask for “budget pricing” for future underground utility projects. This is typically a pretty simple task, but to provide the most accurate and cost-effective pricing, there are a few items that must be addressed that will ultimately determine the final cost to the customer. This article will review some of those variables that help to determine the final pricing for your DI pipe needs.

What Determines the Price of Ductile Iron Pipe?

First and most obvious, we would need to know the pipe size or pipe diameter required for the project. Although that sounds fairly simple, we do, on occasion, have inquiries where the user does not specify a pipe size.

At McWane Ductile, we manufacture DI pipe in 3 to 36-inch diameters, and have the ability to fabricate pipe up to 48-inch diameter.  However, just knowing the size required is not enough. As with many other products, the weight of the pipe will also factor into the cost. The weight will also correlate to the  pipe class.

DI pipe may be ordered as either Pressure Class (rated as Class 150 – 350 psi) or Special Thickness Class pipe (Class 50 – Class 56). Class is based on the thickness and weight of the pipe.

Many parts of the country have started using Pressure Class pipe as their standard specification for ductile iron pipe. Pressure Class pipe is thinner and uses less iron, therefore reducing the cost of the pipe. In addition, the pipe classifications are more in-line with the pressure ratings offerd in some alternate materials.  Pressure Class rated DI pipe will withstand the stated working pressure while retaining all the added benefits of being made of ductile iron.

There are other regions of the country, however, that still rely on the proven history of the heavier classes, commonly referred to as Thickness Class.  Job requirements such as depth of cover, trench type, soil conditions, etc. will help determine what pipe class will be best suited for a specific project.  Additionally, the certain product applications, such as flanged pipe, will determine the class. The minimum wall thickness needed for flange fabrication is thickness Class 53.

This takes us to the various joint types you may require. The most common is a “push-on” or compression joint.  McWane Ductile manufactures Tyton® Joint pipe for this application.  The push-on joint costs the least of the joints produced. This joint is the most common and can be used in any area where thrust restraints are not a concern.

Mechanical Joint (MJ) pipe are much less common today and are only available in 3 – 24-inch diameters.

TR Flex® pipe is a flexible restrained joint typically used with high pressure systems or where soil conditions may be unstable. This joint uses a bolt-less system of wedge restraints to keep the pipe from pulling apart in some of the most extreme operating conditions.

There are also a good variety of “specialty” pipe joints such as River Crossing, Ball and Socket pipe, Grooved & Shouldred joint pipe, and MJ Coupled Joints. These are very project specific and are not generally items maintained in inventory.

What Type of Service Will the Ductile Iron Pipe be Used For?

The next thing we would need to consider is the type of service you would use the pipe for.

There are four main types of service:

McWane Ductile can offer pipe as either cement lined or specialty lined for sewer applications.  Knowing the pipe’s intended service will help determine the appropriate inside lining. The cost of DI pipe will increase with the addition of special linings.

For water services, cement mortar lining (with an interior seal coat) is the most common and usually the standard required.  This is how the majority of DI pipe is stocked.

For Sanitary Sewer systems, consideration should be given to the operating conditions of the line and the types of waste it may carry. For many sewer applications, consideration should be given to using a specialty lining such as Protecto 401TM Ceramic Epoxy.  McWane is an approved applicator of both Protecto 401 and CerampureTM  PL 90 Ceramic Epoxy.

Now we move to the outside coating or paints that can be provided.

The standard for most DI pipe in buried applications is to provide an asphaltic based seal coat, or paint. There are other applications, particularly for exposed pipe, where a special paint may be needed.

An example would be to provide color-coded paint based on the service application:

For these applications, McWane Ductile can provide the pipe with an approved primer coat and the finished “top coat” is usually applied in the field.

Typically, the last thing to be considered is the shipping method. Most all our shipments originate as full truck load lots at a 40,000-pound minimum. We can ship less-than-truckload (LTL) lots, but this generally requires us to pro-rate the freight and add the additional shipping cost to the per-foot price of the pipe.  We can also ship some specialty items, such as short spools of flange pipe, on a covered trailer or an LTL carrier.

On larger diameter pipe (pipe 24-inches and above) the total pieces per load is restricted by the safe height requirements for flatbed tuckload shipments.  Therefore, we are not able to get a full 40,000 pounds on a truck. Again, the total freight for shipping would be spread out evenly to the total pieces (footage) on that load.

The main thing here is that we get as close to a full load as possible to spread out the freight cost applied on a per foot basis to each stick of pipe. 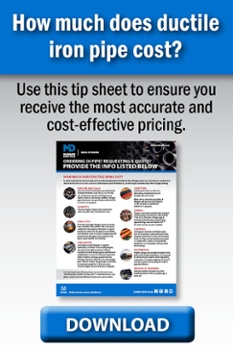 Now, Let’s Talk About Your Project and Your Needs

Again, there are many variables to account for when determining the cost of ductile pipe such as the size of the pipe, linings, coatings, joints, intended use, and more. But don’t fret. McWane Ductile is here to help with your water infrastructure pricing questions and needs.

McWane Ductile offers multiple services to our customers extending far beyond manufacturing DI pipe. From estimating to design, from production to installation, we take great pride in providing education and assistance to water professionals throughout the water industry. Contact your local McWane Ductile representative, today!

Check out all our digital offerings:

Stuart Liddell is the Sales Operations Manager for McWane Ductile. He joined McWane as a Sales Representative for the Texas territory in 1996. In 1998, Stuart was transferred from Texas to Florida and shortly thereafter was named District Sales Manager. In 2008, he was promoted to a Regional Sales Manager position for McWane covering Alabama, Florida, Georgia, and South Carolina. In 2012, he advanced to the position of Assistant General Sales Manager – South where he worked until assuming his current role in June 2017.

While in Florida, Stuart became active in the Manufacturers and Associates Council (MAC), which works closely with the Florida Section of the AWWA and remained active as a MAC member until 2008. In his current position, Stuart has worked with the Sales staff attending numerous trade conferences including the ASCE-UESI Pipelines conference, the National League of Cities, the NAWC, Rural Water conferences, and AWWA sponsored events.

Stuart earned a Bachelor of Science degree in Industrial Distribution/Marketing from the University of Alabama at Birmingham in March 1995. He currently lives in Ocala, FL with his wife, Robbi. They have two daughters; Virginia, who lives in Tampa, FL and Sarah, who currently resides in Atlanta, GA.