How to Protect Water Quality from Permeation Due to Contaminated Soils

For buried pipelines, there can be several soil conditions that adversely affect water quality via permeation. As a waterworks professional, you most likely will ask, “Where and when might these harmful conditions be present, or even potentially develop, and what solution is available to best protect my water system from this issue? We will look at several of the more common risks in this article and discuss protective measures that can be utilized. These risks can include contaminated soils from areas in or near older landfills, industrial sites, and abandoned or leaking fuel tanks, to mention a few.

Permeation is generally associated with plastic non-metallic pipes in water distribution systems and occurs when external contaminants pass through plastic pipe and joints into the drinking water. The most common example of permeation of water mains and fittings is associated with soil contamination in or near where the pipe is installed (Glaza and Park, 1992).

The contaminants that are most commonly found to permeate plastic pipes are organic chemicals, such as lipophilic and non-polar, highly volatile hydrocarbons, and organic solvents. The majority of permeation incidents appear to be associated with gasoline (additives) and solvent related organic chemicals.

Agricultural areas where pesticides are present can also play a significant role. These chemicals can readily diffuse through the plastic pipe, alter the plastic material, and migrate into the water within the pipe. In some cases, the integrity of the pipe has been irreversibly compromised, requiring the complete replacement of the contaminated pipeline.

Concerns to the water utility that extends well beyond the effect on the integrity of the non-metallic pipe are the contamination of the drinking water that has occurred, elevating respective Maximum Contaminant Levels (MCLs) levels. This circumstance can create extended liability and cost to the water utility in the form of public notifications, extraneous required testing, and potential lawsuits by affected customers.

Under some circumstances, leaching of toxic contaminants from the non-metallic pipe itself can occur at levels that pose a substantial health threat. Pipe made from Polyvinyl Chloride (PVC) and manufactured before 1977 are known to leach carcinogenic vinyl chloride into the water at levels above MCLs. (AWWA and EES, Inc., 2002a). For another Iron Strong Blog on this topic by my colleague Jerry Regula, see The Advantages of Ductile Iron Over PVC Pipe.

Similarly, PVC pipes and coating materials may leach stabilizers that can result in bacterial growth. Studies performed in the United Kingdom reported that coliform isolations were four times higher when samples were collected from plastic taps than from metallic faucets (cited in Geldreich and LeChevallier, 1999). ¹

Appropriate measures can be taken to minimize the occurrence of permeation, such as issuing regulations or guidelines that define the conditions under which plastic pipe should be used. For example, the State of California precludes the use of plastic pipe in areas subject to contamination by petroleum distillates (California Code of Regulations, Title 22, Division 4, Chapter 16, Article 5, Section 64624f).

For Ductile iron pipes, permeation and infiltration potentials are limited to the joint gasket, as DI is immune to the same permeation and infiltration risks that effect plastic pipe materials. Ductile iron pipes’ push-on joint systems have been proven effective in actual tests with up to 1,000 psi internal pressure, 430 psi external pressure, and 14 psi negative internal air pressure (a perfect vacuum) with no leakage or infiltration.² Even welded steel pipe does not provide resilience to that level.

There are two reasons, however, why most permeation events do not involve gaskets. First, the mass transfer area associated with gaskets is considerably smaller than that associated with the pipelines (DWI0772, 1997). Second, gaskets are typically installed in lines where the flow is continuous, and flow velocity is high, which increases the dilution effectiveness (Holsen et al., 1991a).

In the picture below of a DI pipe Tyton® joint, please note the extremely smaller portion of the gasket that may be exposed to external influences between the bell lip and the spigot:

Permeation via the gasket material can also be controlled. By replacing the standard SBR gasket with alternate gasket materials, a wide variety of applications are addressed.³ For an informative blog with video by my colleague, Kevin Christian, see Specialty Gaskets: What Are They and Why Do We Use Them.

Which Specialty Gaskets Is Best for Your Project? 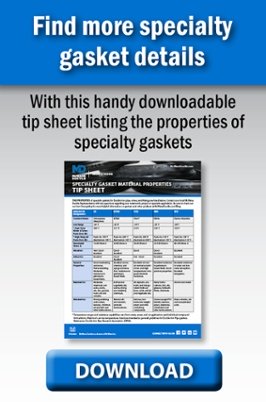 How can a utility protect water quality from permeation due to contaminated soils? The answer is clear. Ductile iron offers exemplary performance versus plastic pipe materials.

The following Standards can also be helpful references when addressing permeation concerns:
ANSI/AWWA Standards C900 through C950 state that if a water main must pass through an area of gross contamination, the manufacturer should be consulted regarding the permeation of pipe walls and joint fittings prior to selecting the material. The Standards also note that research has documented that pipe materials such as polyethylene, polybutylene, polyvinyl chloride, and asbestos cement, and elastomers, may be subject to permeation by lower molecular weight organic solvents or petroleum or pesticide products.

Ten State Standards (Great Lakes…1997) states that non-permeable materials shall be used for all portions of the system, including water mains, service connections, and

Need Assistance with Your Waterworks System?

If you have any questions regarding permeation of buried pipelines and the potential conditions that adversely affect water quality, please contact your local McWane Ductile Representative. We have team members who have managed small and large water utility systems, served in engineering consulting firms, and bring decades of experience in solving field issues involving pipeline construction and operation. From design, to submittal, to installation, we strive to provide education and assistance to water professionals throughout the water and wastewater industry.

John Johnson, ENV SP, NACE CT, Regional Engineer has been with McWane Ductile since 2013, and in the waterworks industry for 20 years. Prior to McWane Ductile, Johnson was the western regional sales manager for a German pump manufacturer and the director of business development for a design-build contractor specializing in water and wastewater construction with $250 Million + revenue. John’s professional designations include ENVISION SP and NACE INTL Corrosion Technician.

John is also a published author in the New England Water Works Association (NEWWA) Journal, Spring Issue How Ductile Iron Pipe Excels Within The ENVISION Rating System. John enjoys helping utilities learn how to support sustainability for future generations and educating others on how McWane Ductile can help them reach that goal.

John's favorite quote; “There is no limit to the amount of good you can do if you don't care who gets the credit.” - Ronald Reagan

McWane Ductile is proud to be a part of the McWane family of companies.